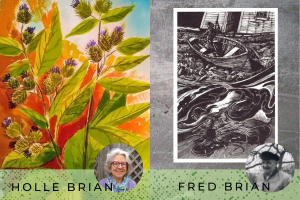 Visit the Stillwater Public Library in June and July to view a unique father-daughter exhibit featuring paintings by artist Holle Brian, as well as works by her late father, Fred Brian. Meet Holle at a reception in the gallery on Tuesday, June 14 from 6:00 – 7:30 PM.

Holle Brian explains this special exhibit, “When I was asked to show some of my paintings at the Stillwater Public Library, I thought it would be a unique opportunity to have a joint exhibit with my father Fred Brian’s work and my own. Every family has a wealth of great stories . . . I feel like there can be no better use of one’s time than to learn all about this beautiful Earth, and share the stories of our families.”

Holle Brian is a professional graphic designer and illustrator living in Taylors Falls, MN. She grew up in Bloomington/Normal, IL, where her father, Fred Brian, taught painting and printmaking at a local university. She moved to Minneapolis in 1979 and has pursued continuing education in art and graphics at the Minneapolis College of Art and Design, White Bear Center for the Arts, and ceramics at the Edina Art Center. She and her husband Rich Smith moved to Taylors Falls when he retired in 2015.

Fred Brian was a painter, printmaker, teacher, sailor, and fisherman, who lived from 1924 to 1999. He taught art at Illinois Wesleyan University in Bloomington, IL from 1952-1984. When he retired from teaching, he and his wife Leona moved to Stillwater, MN where they lived until his death. Fred spent every summer with his family at their cabin on Lake Gogebic in the Ottawa National Forest; his love for the north woods, his experiences as an air force pilot during Word War II, and his interest in indigenous American art and culture provided much of the inspiration for his work.

Learn more about Fred, Holle, and their work in the artists’ brochure.