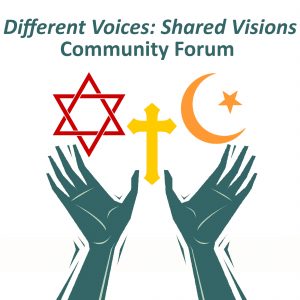 At this community forum, the panel is both pleased and honored to share their perspectives of their faiths in response to questions from the audience.

Judaism, Christianity, and Islam together are about 55 percent of all the world’s religions. They are called Abrahamic religions because all believe that God was revealed to the patriarch Abraham. The God of Abraham, a monotheistic conception who is both transcendent and personal, is common to all three traditions.

At this community forum, the panel will share the perspectives of their faiths in response to questions from the audience. The evening will begin with a short presentation about what the three religions share, historically and theologically. This will be followed by each panelist making a short presentation about himself and what he has learned from working with the others. The conversation will then be opened for audience participation.

This event is being held in conjunction with In This Place: What Makes a Place Holy? on view at The Phipps from October 27 through December 3. A docent-led tour of this exhibit will be offered at 6:00 p.m., prior to the forum.      To schedule a private group tour, call Anastasia Shartin, visual arts director, 715-386-2305.