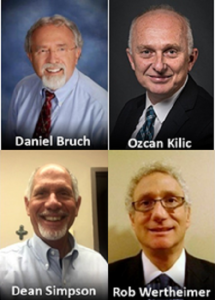 A community forum about religion and environmental sustainability.

The God of Abraham, shared by Jews, Christians, and Muslims, declared that humans are given use of the earth as a trust or as caretakers. The Hebrew, Christian, and Islamic Scriptures strongly support respect for nature, for the creatures of nature, and for the care, protection, and preservation of everything in the natural world. These Scriptures also speak boldly about our responsibility for the environment and our continuing caretaker relationship with nature. Our conversation together will reflect this environmental ethic we share.

Rob Wertheimer grew up in New York City, the only child of a German Jewish immigrant and Holocaust survivor. He has been living in Wisconsin since 1981 and a resident of Hudson since 1991, where he maintains his own law practice. He practices in the areas of criminal/traffic law, bankruptcy, real estate, and probate. He is married to Linda and has two children, Karl and Greta.

Ozcan Kilic is a professor and chair of the Department of Management and Marketing at the College of Business and Economics (CBE) at the University of Wisconsin-River Falls. Prior to joining the CBE, he served as a professor at Istanbul University Turkey. His areas of expertise are strategic marketing, marketing research, B2B marketing, and relationship selling. He was born to Muslim parents in Turkey and grew up in Germany as the son of a Turkish Gastarbeiter (guest worker) family. He is married to Secil. They have two children, daughter Ece and son Utku. The Kilic family recently moved to Woodbury after living in River Falls for 12 years.

Daniel Bruch serves as the panel moderator. He has lived in Hudson since 1996 and is a retired Lutheran clergy and academic. He has served as a parish pastor, university chaplain, university and seminary professor, and administrator. He has lived and taught in Hungary and Indonesia. He is married to Elizabeth and they have four grown daughters and nine grandchildren.

This free event is held in The Phipps Center for the Arts’ Black Box Theater.

Different Voices: Shared Visions is a part of the regular programming of The River Channel (Comcast cable 6 and 15), Hudson/North Hudson Community Access Television. It is also available on YouTube and other cable channels in Wisconsin. The community forum will be recorded for broadcast by The River Channel.