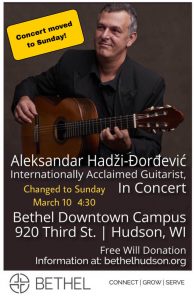 Hazdi-Dordevic has a prolific and versatile career as a guitar pedagogue and as concert performer. He has built a prominent career as a solo and chamber artist, performing in Serbia, Slovenia, the Czech Republic, Croatia, Cyprus, Bulgaria, Montenegro and Bosnia and Herzegovina. He has taught guitar at several music schools in Belgrade, and some of his pupils are now accomplished artists and professors of guitar at universities of Europe and USA. His performances were praised by critics for his “beautiful, colorful tone, musicality and intuition that is seldom heard” (Политика, February 2005).